Dalat is quite different from anywhere else you’ll visit in Vietnam. You would almost be forgiven for thinking you’d stumbled into the French Alps in springtime. This was certainly how the former colonists treated it – escaping to their chalets to enjoy the cooler climate.

Da Lat (The City of Eternal Spring) can be quite different to all the towns you have been to during your tours in Vietnam because of the spring-like weather all year round and the romantic mountain landscape. Located in the middle of Central Highland at the altitude of 1,500 meters, Da Lat was once a favorite retreat for French colonials and Nguyen Kings to escape the summer heat. The legacy of French architectural influence can still be seen in Da Lat town with lovely red-roofed stone buildings and churches. The serene lakes and colorful gardens make Da Lat a perfect place for relaxing stroll while the surrounding forests and waterfalls are suitable for adventure activities like mountain-biking or rock-climbing.

Dalat’s temperature hovers between a pleasant 15°C (average daily minimum) to 24°C (average daily maximum). Effectively Da Lat has two seasons – dry (December to March) and wet (April to November). Despite the mild temperatures, by the end of the dry season the lush green surrounds turn to brown. Even in the wet season, mornings normally remain dry – allowing time for sightseeing before the deluge begins.

Having existed for more than a century also leaves the city a valuable architectural heritage, compared to a European architectural museum of the twentieth century. The rich natural and culture make Da Lat become one of the famous tourist destinations in Vietnam, attracting millions of tourists yearly to visit and relax. Da Lat is also a center for education and scientific research, a city of diverse religions with the presence of hundreds of temples, churches, monasteries as well as a special rich agricultural area with vegetable and flower products. Thanks to its mild climate, beautiful natural landscapes and rich architectural heritage, Da Lat is also known by many other names such as "Misty City" and "City of Thousand Pine". 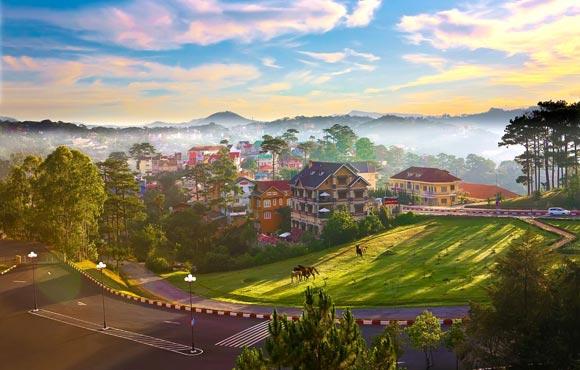 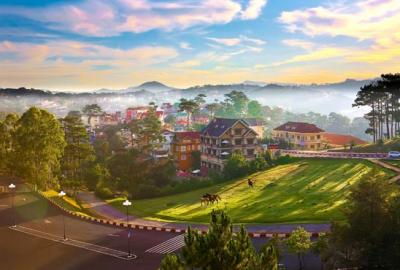