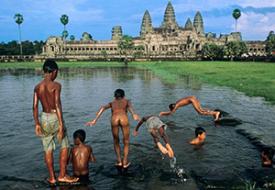 Little is known of the early history of Cambodia, although there is evidence of habitation in parts of the country dating as far back as 4000 BC. It is also known that Chinese and Indian traders exchanged goods with people living on the coasts of present-day Cambodia and Vietnam as early as the AD 1st century.

According to Chinese chroniclers, a Hindu kingdom known as Funan flourished between AD 300–550, but the power of this trading empire declined for reasons unknown and their territories were claimed by the Chenla dynasty, which was divided into two parts – Land Chenla and Water Chenla – in the 8th century. During this period Cambodian power spread westwards into parts of Thailand.

Cambodia’s golden era came with the arrival of the Khmer dynasty, which ruled from the 9th to the 15th centuries and made the kingdom of Kambuja (from where modern-day Cambodia gets its name) one of the most powerful in Asia. The Khmer established their most famous capital at Angkor, founded as a Hindu spiritual centre but later converted to Buddhist worship.

A long period of decline followed, before the country fell under French colonial control in the 1800s. Independence was finally achieved in 1953, coinciding with the French being driven from Vietnam, after which Norodom Sihanouk was appointed king. His first reign lasted until the 1970s, when a coup d’etat by the prime minister led to Cambodia being caught up in the Vietnam War. American air raids on Cambodia played a direct role in the rise of Pol Pot and the Khmer Rouge, who seized control after a brutal insurgency in 1975.

During the four years of Khmer Rouge rule, tens of thousands of people were executed in a systematic campaign of genocide, targeting academics, the wealthy, the educated, city dwellers and even people who wore glasses. In 1979 the Vietnamese army captured Phnom Penh and occupied Cambodia, which was renamed the People's Republic of Kampuchea.

Following UN intervention, Sihanouk returned to the throne in 1993, before abdicating in 2004 in favour of his son, Norodom Sihamoni. In the subsequent elections, the left-wing Cambodian People’s Party came to wield most of the power, led by prime minister Hun Sen. The most important ongoing issue facing Cambodia is the clearance of land mines and unexploded ordnance left behind from American bombing and the civil war, which continue to kill hundreds of people every year.

Religion: 95% of the population are classified Buddhist (Theravada), the remainder are Muslim and Christian. Buddhism was reinstated as the national religion in 1989 after a ban on religious activity in 1975.

Sensitivity to politically-related subjects in conversation is advisable. Avoid pointing your foot at a person or touching someone on the head, as it’s considered insulting. Women should keep their shoulders covered and should not wear shorts when visiting pagodas.

Photography: Permitted, with certain restrictions such as the photography of military installations, airports and railway stations. It is considered polite to ask permission before photographing Cambodian people, especially monks.

Khmer is the official language and spoken by 95% of the population. Chinese and Vietnamese are also spoken. French was widely spoken until the arrival of the Pol Pot regime and is still taught in schools. English is commonly spoken in Cambodia. It’s estimated that over 50% of the population are conversational in English, but travellers in rural areas may find in hard to communicate in smaller villages. Learning a few basic Khmer words will get you far, and earn you respects from the locals.