Buon Ma Thuot is a city directly under Dak Lak province, the largest city in the Central Highlands region and the largest mountainous urban area in Vietnam. The city is divided into 3 zones: central, suburban and inner. Serving as a key tourist destination of Dak Lak, this city attracts a lot of tourists every year because of its charming pristine charm and mountainous landscape.

Coming to Buon Ma Thuot, remember to stop by Gia Long, Dray Nur, Dray Sap waterfall group. This is considered a marvelous natural wonder bestowed by nature mother to Buon Ma Thuot Forest. Dray Nur also has the colloquial name: Wife waterfall is located right next to Dray Sap waterfall (also known as Husband waterfall). Gia Long Waterfall also has another name: Dray Sap upper waterfall because it is adjacent to Dray Sap waterfall upstream. Far from this place, the stream can be heard rumbling like a melodious music. Coming closer, you may be surprised by towering altitude and white water constantly pouring down, every drop of water splashes to meet the sunlight sparkling like a star.

Yok Don National Park is another fascinating place in your Vietnam vacation. This site is located in 3 districts: Buon Don district, Ea Sup district (Dak Lak province) and Cu Jut district (Dak Nong province). Yok Don is considered one of the largest special-use forests in Vietnam, located on a relatively flat area, with two small mountains to the south of the Serepok River. It is mainly natural forest and also the only national park in Vietnam to conserve the special type of dipterocarp forest (broadleaf forest). When you come here, you will enjoy the typical types of ecotourism such as elephant riding, walking, mountain bike exploring primeval forests or canoeing along the poetic Serepok stream. In addition, at night, you can go to see the wildlife covered by a lush green.

If you are a coffee addicts, Trung Nguyen coffee village may treat you well with the special type of coffee, which attracts a great number of tourists every year. Not only is the famous place to buy coffee but Trung Nguyen Coffee Village is also designed as a miniature park. The small landscape is beautifully designed, majestic as large waterfalls, bridges, streams, lakes, stilt houses, which may be an ideal materials for your photographs. Especially, there is a museum displaying musical instruments, gongs, gongs and daily life items of ethnic minorities.

Last but not least, it is a huge mistake when you do not pay a visit to Don Town (Bản Đôn). As a famous landmark of Vietnam, Ban Don is also known as a place with the tradition of hunting and taming wild elephants. There are splendid landscapes extremely suitable for eco-tourism. The outstanding destinations are usually concentrated in areas such as in river banks, Bay branches, Cau Treo tourism, Duc Minh lake, ancient stilt houses, tombs of elephant kings, ... 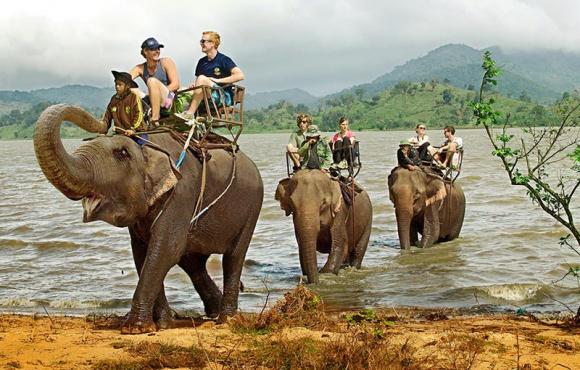 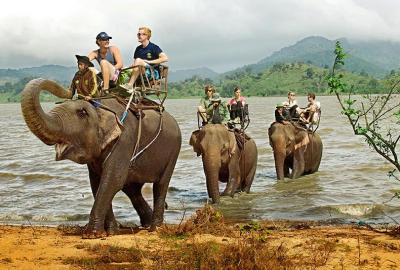 Tour in Buon Me Thuot