Khe Sanh - Quang Tri was an important strategic position during the War because the US military set up Khe Sanh Base with the expectation of stopping the North's military support from the North to the South. The 75-day siege of Khe Sanh began on 21 January 1968 with a small-scale assault on the base’s perimeter. When the marines and South Vietnamese rangers braced for a fullscale ground attack, Khe Sanh became hotspot of global media attention. It was the cover story and the front pages of countless newspapers around the world. During the next two months the base was subjected to continuous ground attacks and artillery fire, and US aircraft dropped 100,000 tonnes of explosives in its area. But the expected attempt to overrun the base never came.On 7 April 1968, after heavy fighting, US troops reopened Hwy 9 and linked up with the marines, ending the siege.

Today, Khe Sanh is one of the historical sites attracting tourists having Vietnam private tour yearly.

Located about 500 km south of Vietnam's capital Hanoi, Khe Sanh always gives visitors many fascinating gifts. When you need some salty sea breeze, just setting your foot on the endless sandy beaches to find yourself small in the ocean. Nhat Le Beach or Da Nhay Beach is some places where you can experience these things and soak in crystal-clear water.

If you are historical buffs and want to know more about Vietnam's past, you can have a different experience when coming to the Landmine Remedy Action Display Center, a famous tourist destination just 45 km from Khe Sanh. This place is full of remnants, fascinating old photographs, reconstructed bunkers and American aircraft.

If you ask for the most noisy destination in Khe Sanh, it's no different than the Huong Hoa Stadium, which is filled with holiday atmosphere with the colors of flags, slogans, banners and bustling sounds of laughter. After a period of intense enthusiasm for cheerleading, be sure to find a cafe near the stadium and order some snacks to recharge your energy.
A trip to Dong Ha (55 km from Khe Sanh) is also an ideal option for you. Quoc Khanh is celebrated on September 2 with countless bustling activities, so if visiting Khe Sanh on the right occasion, your vacation will be filled with cordiality. 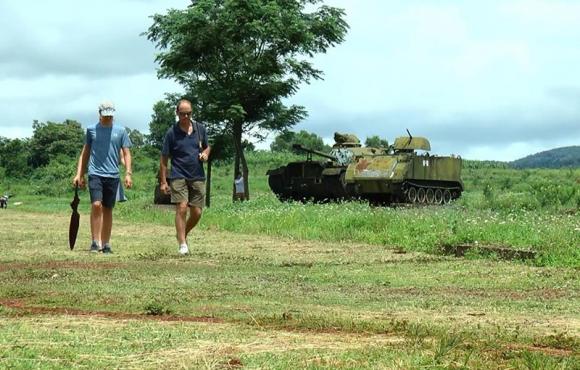 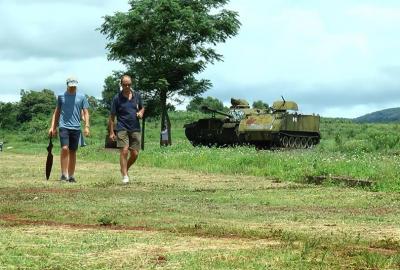